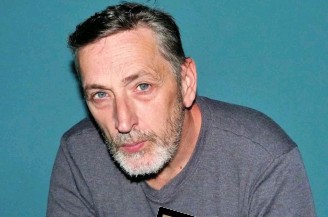 My schools: I started off at St Aloysius Infants, then progressed to their primary, and then onto their senior school, which was a new build comprehensive, that already felt like it was falling apart, a couple of miles away. My favourite teacher: I wasn't a particularly bright child, so spent most of my infants and primary education in what was then called ‘the B class.’ That brought me, in third year primary, under the wing of Mr Eddie Collins. He seemed like an ancient old man to me, but looking back he was probably late 40s or 50s, and one of those teachers who you feel really craved a career on the screen instead of in a classroom. He was a special man indeed, and one who I often think about. My favourite subject at school: I genuinely don't think I had one! I know people often expect me to say English, but I genuinely don’t remember ever being excited by it at all. Were you streetwise or a bit of a geek? Where I lived you had to be streetwise! I was lucky that my older brother had been the hardest kid in the school so a little of his reputation followed me around. It’s strange how your perceptions of yourself are different from others though. I went to a school reunion a few years ago and discovered that I'd been perceived as being ‘one of the cool kids’, when I’d spent years thinking I was the fat scruffy thick kid. There’s a lesson there somewhere. I just need to figure out what it is! My favourite childhood singer/band: David Bowie no contest. My brother had all his albums, but aged about 10, I spent a chunk of my birthday money on buying the Hunky Dory album just so I would have my own copy to cherish and play. It’s still my favourite bit of music and I try to play it a couple of times a year at the very least. My favourite extra-curricular activity: Walking around with the lads and my best mate, Sweeney. Just hours and hours of evening walking and talking. Occasionally we’d get the bus into the midweek empty city centre (without our parents knowing) and spend the evening shuttling back and forth on the Mersey ferries after paying once and not getting off. Do you remember your first school crush? School disco, second year primary, I remember it well. I was going to walk her home afterwards but her dad was outside so I ran off instead! My favourite book: I devoured the school library like a locust. The book I checked out the most was called ‘The Goalkeepers Revenge and Other Stories’ by the late great Bill Naughton. I stumbled across a copy in an old bookshop in Notting Hill last year and bought it. School dinners: I viewed school dinners from afar! I was one of those kids who sat on their own table with an old ice cream tub filled with sandwiches and club biscuits. I used to envy the puddings if I’m being honest, but the rest of it looked pretty grim compared to my salmon spread on white bread specials! My ambitions at school: I just wanted to leave and become a writer. Looking back, it all worked out I suppose!