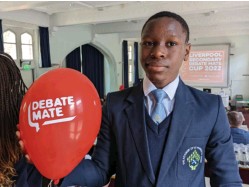 Students from The Academy of St Francis of Assisi (ASFA) were victorious at the Liverpool secondary Debate Mate cup recently. The Kensington-based academy, which is part of All Saints Multi Academy Trust, has been successfully taking part in Debate Mate for many years. The purpose of the programme is to use debating to deliver key skills to young people in schools. Focusing on developing communication, interpersonal and higher-order thinking skills, and building confidence and selfesteem. In April, students from Years 7, 8, 9 and 10 took part in the Liverpool heats alongside other secondary school from the city. The academy is now ranked second in the Liverpool Debate Mate Cup and is eighth overall in the national Secondary Urban Debate League and has now made into the Urban Debate League Finals in June. One of the motions the teams needed to debate was ‘This house would allow artificial intelligence to make political decisions’ – incredibly, the academy won every debate with this motion. One student from the team said: “I have been part of Debate Mate for a few years, and I love having the opportunity to debate topics from different perspectives. I’m really happy to have made it to the final with my team.” Miss Hannah Eley-Baylon, teacher of science at the academy, has been instrumental in helping students be part of the Debate Mate initiative and holds a weekly club so that they can learn and practice debating. She said: “ASFA has been really successful in Debate Mate over the years and I’m so proud of our students for taking part and making it into the final. “To see them grow in confidence and articulately put forward arguments is so impressive. Well done to our Debate Mate teams, you are a credit to the academy!”