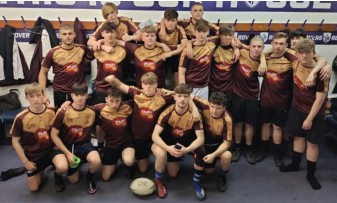 A thrilling season closer for St Cuthbert’s Catholic High School sees them crowned the Year 11 Rugby League Boys Champion School. The St Helens side wrapped up the title with a 42-16 win against St Benedict’s from Whitehaven. The Champion Schools tournament is a full contact knock-out rugby league football competition open to every secondary school in England, Scotland and Wales. A spirited St Cuthbert’s, in a fast-paced game, showed the same determination they had shown throughout their impressive campaign, where they defeated The Brooksbank School and Ponteland High School in the quarter and semi finals. A fine example of some brotherly connection helped the Parr team take the lead early on in the final – Dylan KellyDuffy provided a smart offload to his brother Trent who carried it over to make it 10-6, and Nathan Benson showcased some impressive kicking throughout, making it 22-6 at the break. Trent Kelly-Duffy was named man of the match for his efforts. Trent said: “I’m delighted to have won this on top of the overall win. We are a force to be reckoned with at the moment and I love playing with this team!” This was St Cuthbert’s fifth final in the Champion Schools competition and the first one to take place after the last two seasons were abandoned due to the coronavirus pandemic. Samuel Westhead, head coach for the team, said: “A huge well done to all of the boys for their excellent commitment and dedication, not only on the night but over the past few months. They are a credit not only to our school but to their local community, as they are now classed as the ‘Best Rugby School in the UK’.” Catherine Twist, headteacher at St Cuthbert’s, said: “We are proud of every single one of our young players – it shows once again we have a lot to celebrate here at St Cuthbert’s. “There has been an incredible amount of effort and activities going on in PE, both in and out of lessons, this past year and the talents and hard work of our young people never goes unnoticed.” The title-holders will also play in the St Helens Cup Final next week against Rainhill High School, at Totally Wicked Stadium, and in the North West Cup Final against Wade Deacon High School, at Robin Park Sports Arena.