What’s new in DVD and gaming This title will be released on 10 May 2021 One for the history buffs! The Blitz saw over 40,000 civilians killed and more than a million houses destroyed in London alone when the German’s conducted mass air attacks against Britain from 19401941. Despite an eight-month campaign, the will of the British could not be broken, and the Blitz went down in history as a failure. This incredible box set features three new documentary films with interviews from those who were there: THE BLITZ Eighty years on, The Blitz is a definitive look into the build-up to the raids and detailed footage of the destruction that followed. It features interviews from those who lived through it and shows the sheer will of an entire nation who held strong and never surrendered. STORIES FROM THE BLITZ Stories from the Blitz takes a look back at individuals’ accounts of incredible human courage and the will to survive as the air raid sirens went off and they waited for the bombs to drop. Featuring interviews and amazing archive footage from one of Britain’s darkest periods in history. THE BLITZ – THE AFTERMATH With interviews and archive footage The Aftermath looks at the lasting effects of the mass bombings – from the loss of life to the immense damage caused to buildings across the country – and how the Blitz changed the face of Britain’s cities and lives. 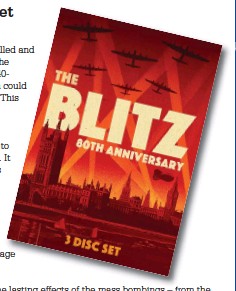